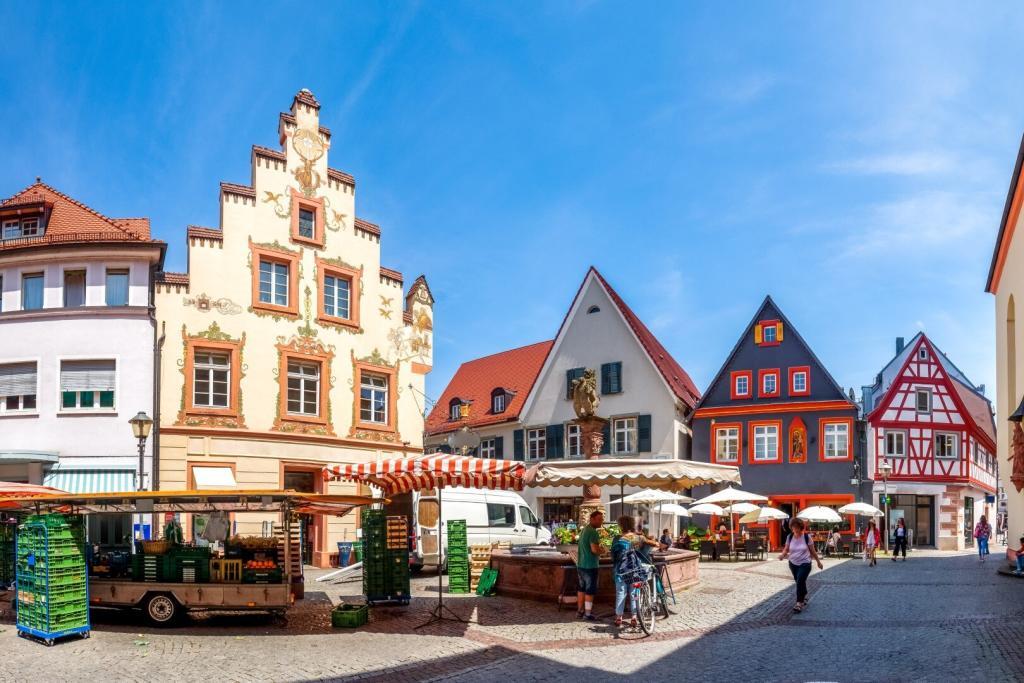 In the west of Baden-Württemberg we find the beautiful city of Offenburg. It is located in the southern Upper Rhine region and is the largest city in the Ortenaukreis. The former imperial city is now the district town of Ortenau. If you drive about 20 km in a north-easterly direction, you will follow Strasburg.

The first written records of the city can be found as early as 1148. In 1240 it became a free imperial city. Thanks to a copper engraving by Merian and a drawing by Grimmelshausen, we know that it was surrounded by a triple wall. This was provided with towers and a bastion. These high security measures were presumably necessary because Emperor Friedrich II had silver denarii minted in the Offenburg imperial coin. Louis XIV carried out several military actions against Offenburg. The entire city burned down, except for the Capuchin Monastery and two houses, when a fire was started in 1698. During the Second World War, Offenburg was reoccupied by the French, which was no surprise given its geographical location.

After the fire in 1698, the entire city was rebuilt, only the 1,4 km preserved city wall is older. The overall picture is still shaped today by the baroque.
To name a few examples.

The picturesque old town offers even more impressive baroque buildings, these are only a small selection. They are all worth a visit.

With around 75.000 m² of indoor and outdoor space, Offenburg has made a name for itself as a trade fair location since the 60s. Since then, several trade fairs and congresses have taken place here every year. Among other things, the Upper Rhine Fair, the Euro Cheval or the Baden Wine Fair.

104 women and men had to endure a witch trial in Offenburg. Unfortunately, 89 of them did not end well, they ended with an execution. Particularly noteworthy is Agnes Gotter, her steadfastness in the torture chamber probably saved many lives. Because after her trial, without a confession, the persecution ended in Offenburg. Today only traditional events during the Swabian-Alemannic Carnival remind us, for example, when the Fasent child is baptized on “Dirty Dunnerschdig”, the witch's meal and the burning of the straw witches on Shrove Tuesday. The largest and most famous sponsors are the Offenburg Witches 'Guild and the Old Historical Fools' Guild in Offenburg.

Offenburg is a city that combines tradition and the present. Find the latest progress at one of the many fairs or come by and celebrate with the witches by the big fire. If neither of these is to your liking, you can take a relaxed stroll through the old town and admire the baroque buildings.

Todtnauberg with a beautiful view
We start our mountain bike tour at the entrance to Todtnauberg (parking facilities), turn right into the downhill Kreuzmattstrasse, after the bridge into the ascending Ennerbachstrasse

Kniebishütte
The Kniebishütte is located at an altitude of 935m on the Kniebis. In the immediate vicinity of the mountain station of the Lamm ski lift and directly on the Black Forest High Road. A dream