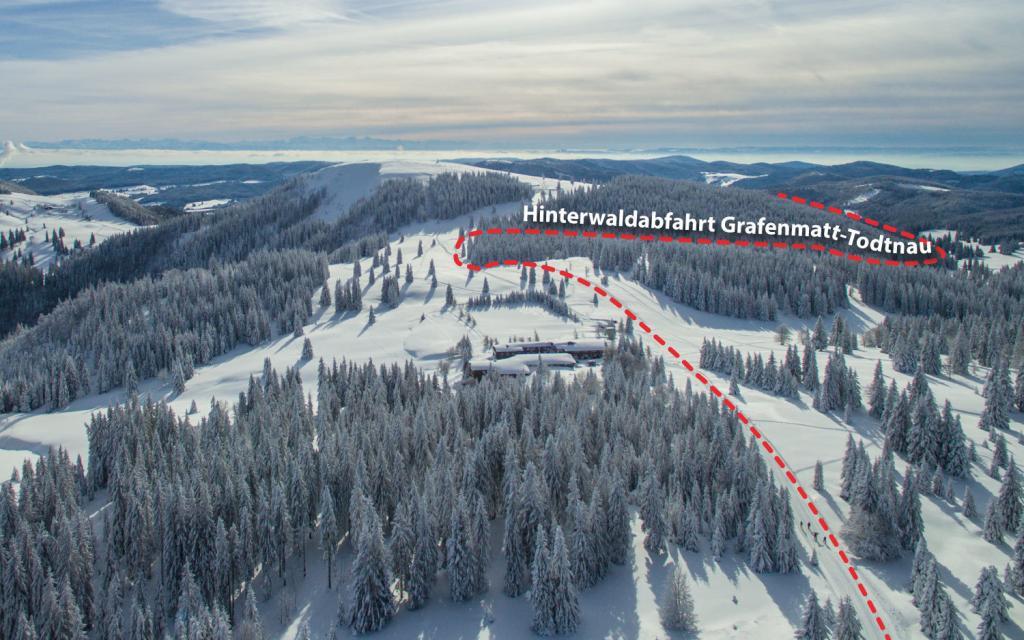 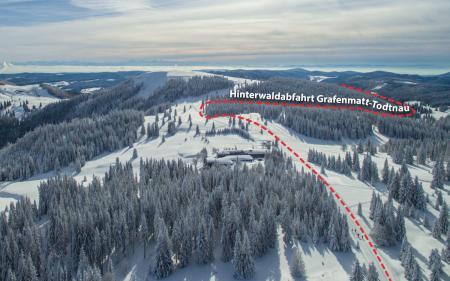 The Todtnauer Hinterwald run is the longest run in the Black Forest with a length of 9300 m and a difference in altitude of 736 m.

Starting point of the Hinterwald run to Todtnau is the Grafenmatt-Höchst (1346m). The best way to get there is with the modern Rothausbahn from Fahl. There is also a bus stop right next to the train station, so you can use public transport to return after departure.

The descent is not an official piste, is not always rolled and is therefore not specially secured. You use it at your own risk.

After starting at Grafenmatt-Höchst, you pass the Herzogenhorn performance center and turn right at the bell guide to Todtnau.

If the conditions allow it, it is advisable to squat at full throttle from here. At the Röslehütte it is a little uphill and the skis brakes automatically.

At the refuge, turn right to Todtnau. A rapid descent now follows to the Mollenbachhütte. The slide that now follows shows who has applied the right wax. If you made the wrong choice, you may have to push something. When the flat section is behind you, it's full steam ahead to Todtnau. When you arrive in Todtnau you can find it at the Poche or at the inn Feldberg bus stop.

Since 2005, the Todtnau Hinterwald Inferno has been taking place on this descent if the snow conditions allow. The race is run by the Todtnau Ski Club, the oldest ski club in Germany, and is one of the longest downhill races in Germany.

Where is the Hinterwald run?

Pictures of the Hinterwald run

Video of the departure

Baden Asparagus Route
The Badische Spargelstrasse naturally puts asparagus in the foreground, but it has much more to offer than just asparagus! From beautiful castles, museums and
Black Forest hosts with swimming pool
On a hot summer day in the swimming pool is pure refreshment! These hosts offer you this opportunity.
Guided tours in the Black Forest
The Black Forest offers its visitors with dense forests and idyllic river landscapes the ideal place for a relaxing holiday with numerous excursion possibilities. All Seasons