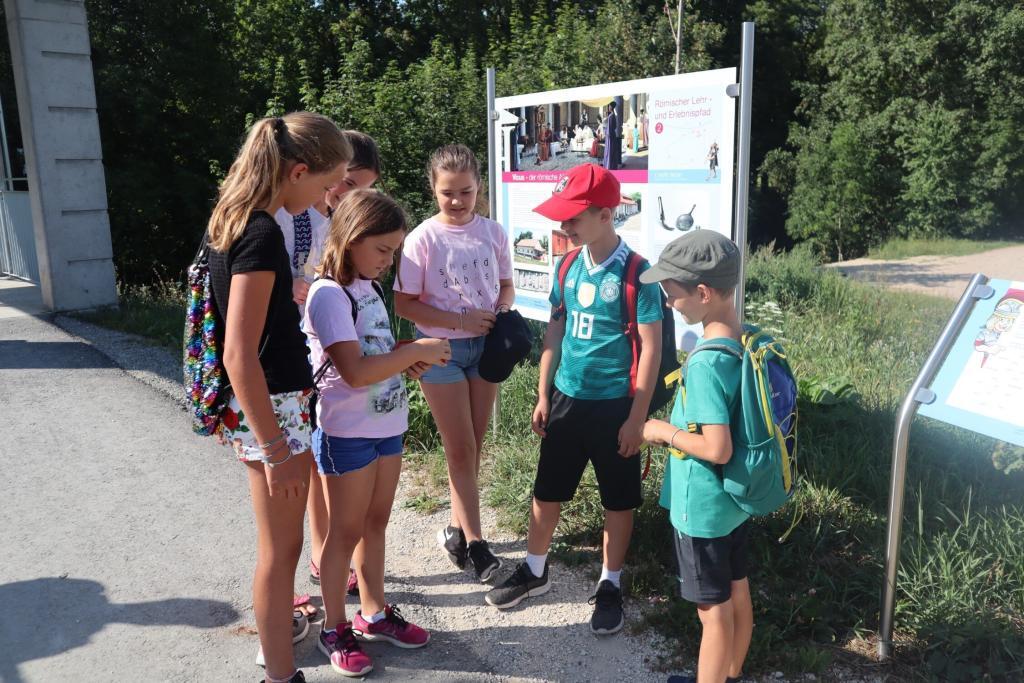 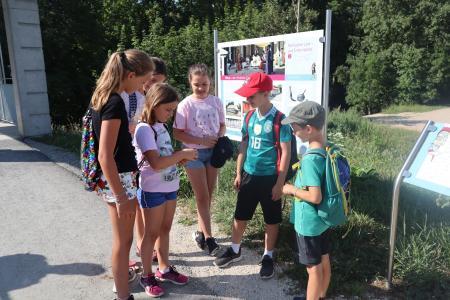 Go on a journey of discovery through ancient Roman times with the family!
On the Römerpfad Hüfingen you can learn a lot about the Romans and immerse yourself in their world.

The Roman path extends over 3 km and overcomes 30 meters in altitude. For the most part, it leads over natural paths and dirt roads, past the bath ruins and the former fort of the Roman legionaries. At the Baarblickhütte, a rest area and playground invites you to picnic and relax. During breaks, enough provisions should be taken with you to eat and drink. The Römerpfad Hüfingen is not suitable with a stroller. For a safe step on the Children's trail sturdy shoes are required. Depending on your own pace, the path can be hiked in 1,5 to 3 hours.

Eight adventure stations have been set up along the entire hiking trail, each inviting you to listen, play, read, feel and be amazed and tell you about the history of the Romans in Hüfingen.

The Roman path begins at the Bathroom ruin and ends at the same point after a tour. The path was designed for children and adults alike.

The history of the bathroom ruin

The fort formed the western end of the "Danube Limes" between 37 and 45 AD and was called Brigobannis at that time. From there, the Danube Valley Road, the border area of ​​the Baar, and the crossing over the river Breg were monitored.

The bathing building on Galgenberg was originally built for the Roman soldiers, but continued to serve the civilian population after they left around 101 AD.

The entire system measures 19 x 30 meters. Due to the bricks found, it could be attributed to the construction of the 11th Legion, which was stationed in Windisch (Vindonissa) in Switzerland during the period 69-101 AD. The bath is one of the oldest fort baths in the northern Alpine region.

The excavations of the bath ruin

The Roman Brigobannis was rediscovered in earlier times. In 1605 there were reports of coin finds from Roman times and of a brick mosaic floor near Galgenberg. In 1820 the place “Brigobanne” could be identified with Hüfingen by means of a Roman road map. The excavation of the bath was then ordered. The Latin inscription above the entrance to the protective structure still reminds of this today. After further excavations, the size and structure could be specified. Between 1991 and 1995 the facilities were renovated and made accessible to interested parties.

Guided tours through the bath ruin

The Roman bath ruin can be accompanied by a trained tour guide for groups and school classes on request. A lot of exciting things can be learned about the archeology and life of the Romans during the tour.

Image courtesy of City of Hüfingen

Riesenbühl tower
The Riesenbühlturm is located in the district of Schluchsee. It is 35m high and offers a wonderful all-round view. The visitor has to climb 140 steps
Holidays in the Black Forest for a great holiday season
With its 11.100 square kilometers, the Black Forest is the largest holiday region in Germany and certainly one of the most popular. Because a Black Forest vacation is a
Ottenhofen

Agricultural adventure trail Ottenhöfen - LEPO
Bringing children closer to nature in a playful way and having a great time as a family, the Ottenhöfen Agricultural Adventure Trail - LEPO is perfect for this
Hohberg-Diersburg

Wunderfitz path Hohberg
The Wunderfitz path in Hohberg invites families with children to a great children's hike. On the WUNDERFITZ tour there are information boards for the forest as well