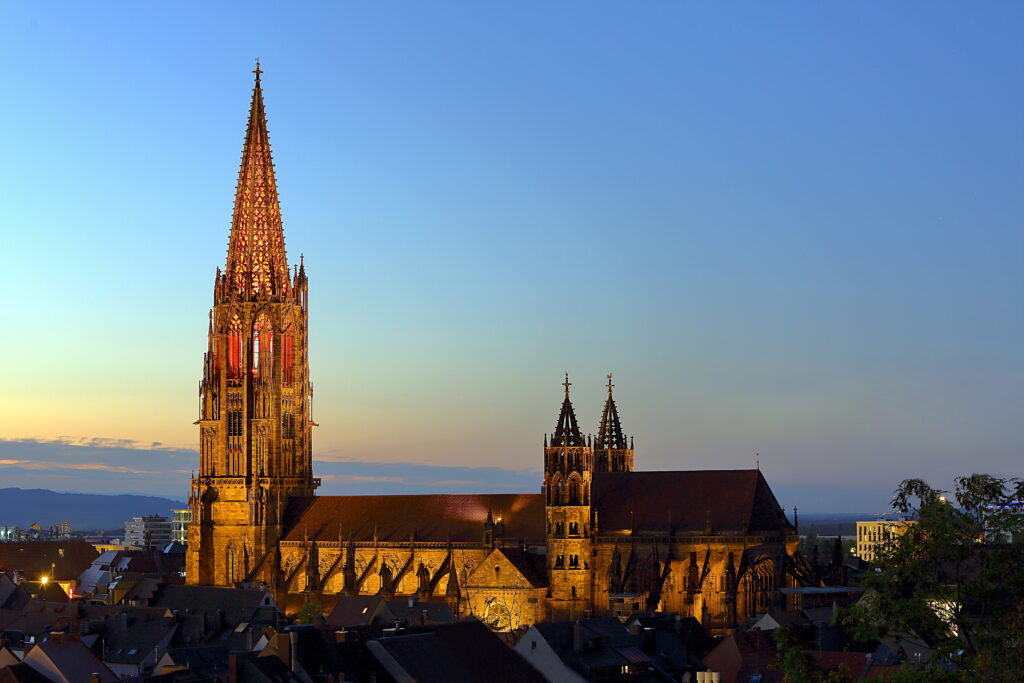 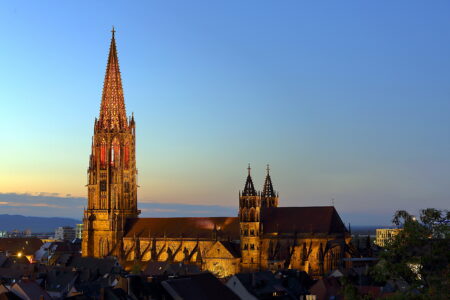 The Freiburg Cathedral of Our Lady

The Freiburg Minster "Our Lady" is located in the beautiful old town of Freiburg. In the following article you will learn a lot of interesting facts about this place of worship.

The Freiburg Minster in the old town

The Freiburg Minster is located in the middle of the wonderful old town of Freiburg. Even if you don't know your way around Freiburg, the Minster is basically unmissable. This is mainly due to the really monumental dimensions. On the other hand, the parish church rises from the so-called Münsterplatz, which forms the center of Freiburg's old town.

The exact address is: Münsterplatz, 79098 Freiburg.

In addition to its purpose as a popular attraction, the Minster is used nowadays, in particular as a church for the cathedral parish of the Archdiocese of Freiburg.

The hallmark of the Minster is without question the extremely high lookout tower on the west side of today's cathedral. In expert circles, this tower is also known as “The most beautiful tower in the world”. The extremely impressive part of the Minster owes this title to the well-known art historian Jacob Burckhardt. Burckhardt gave the tower its name in 1869.

Another feature is the wonderfully ringing bell of the parish church. This is already 750 years old and is one of the oldest Angelus bells in Germany. Its sound is particularly popular among connoisseurs and its flawless sound inspires numerous visitors today.

The foundation comes from the "Konradin" church built around 1130. Construction continued around 1200 in the late Romanesque style. Parts of this are still there today. Among other things, the basements of the side towers.

The construction of the west tower, which has already been discussed, and the striking nave followed from 1230 to 1330. These two components were built in the French Gothic style and are still central points of the cathedral today.

As a result, the completion of the building was delayed, in particular due to the redesign of the chancel. Reconstruction began in 1354. This information is so accurate that an inscription on the north portal can still be seen today. Nevertheless, its completion took until 1510, when the auxiliary bishop of Constance at the time undertook the inauguration.

Upon completion in 1510, the Minster received much praise and recognition for its unique architectural style. In the course of this, it became, among other things, the motif of many works of art of the time.

The Freiburg Minster survived the attacks of World War II without major damage. The cathedral was also spared during the brutal bombing raids by the Royal Air Force in November 2. And that despite the fact that almost every building in the vicinity was destroyed down to the foundations. Only parts of the roof and a few decorative figures were damaged and replaced shortly thereafter.

Facts and figures about the Minster

The building, completed in 1510, is 116 meters high and is located on Freiburg's Münsterplatz. The total length of the huge structure is 125,83 meters. The very elaborately designed inner courtyard is 25,70 meters high. The bell for which the current cathedral is known, among other things, is already 750 years old.

As a visitor, you can discover 91 uniquely designed figures all around the floor plan of the building. A few were destroyed during World War II, but replaced with copies a short time later. This was also so important because the figures not only serve as decoration, but also as rain drains.

However, the main attraction of the Minster is and remains the impressive west tower. If you think you can easily visit it by elevator, you will be disappointed. In order to enjoy the unique view over Freiburg, you first have to conquer 333 steps.

The patron “Our Lady”

The term "Our Lady" originally comes from the patronage that leads the Freiburg Minster. Similar to many other Catholic churches, the Minster of Freiburg is dedicated to Mary, the Mother of God. For this reason, Maria is the patroness of the Archdiocese of Freiburg and is particularly honored here.

When and how can the Minster be visited?

Normally, today's cathedral is open from Monday to Saturday from 20 a.m. to 30 p.m. On Sundays you even have the opportunity to visit the parish church until XNUMX:XNUMX p.m. Admission to any part of the cathedral is free for all visitors. You are welcome to inquire about the Website of the Freiburg Minster inform about upcoming events.