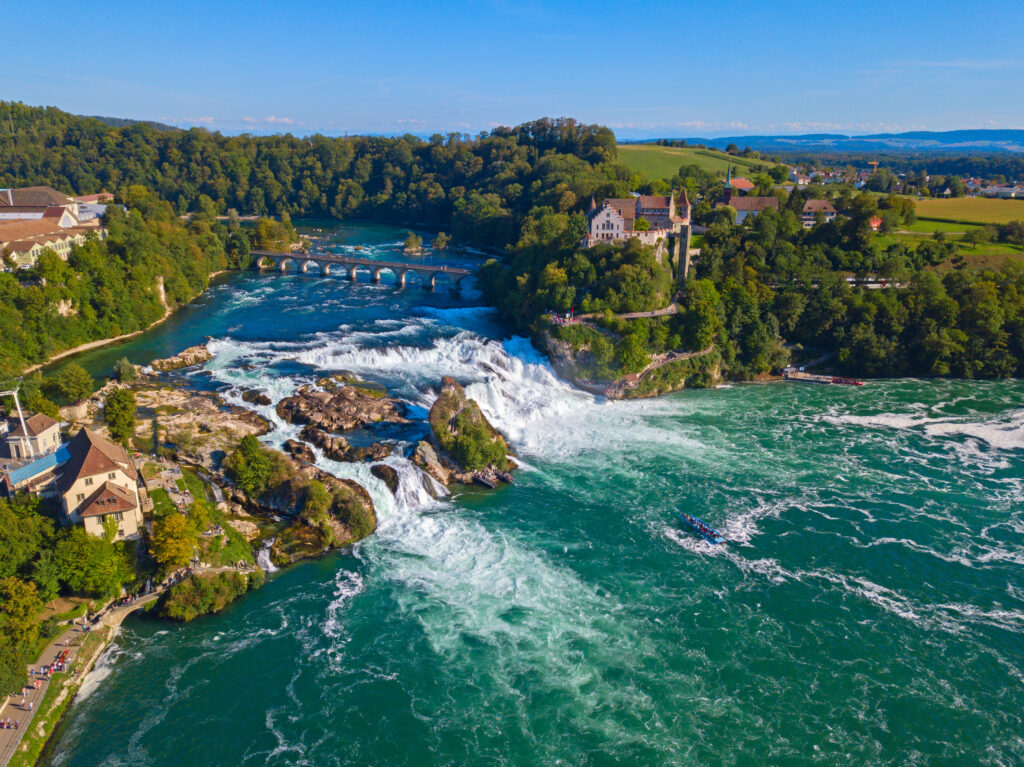 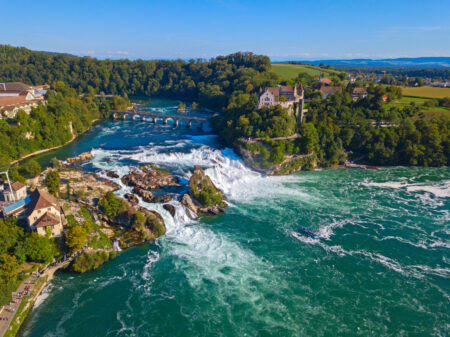 Experience the Rhine Falls from Schaffhausen up close

Very close to Schaffhausen, visitors can have the unique experience Rhine Falls enjoy. There are viewing platforms on both sides of the fall, from where you can have a very special view of the Rhine Falls. They are easy to reach via well-developed paths and tower far above the river.

The notorious Schlössli Wörth is located directly at the Rhine Falls basin. The Schlössli was built in the 12th century and is now used as a restaurant. That was not always so. The castle was once a customs and goods transhipment point. At that time, the High Rhine was an important transport route. The goods were between Basel and transported to Lake Constance by ship. Between Schaffhausen and the Rhine Falls basin, however, the roads had to be used instead. This is how the city of Schaffhausen came into being.

The Schlössli is the starting point for boat trips. Among other things, visitors can Castle Laufen translate. This building towers proudly on a steep cliff on the left bank of the Rhine between Basel and Lake Constance. The house, which was once used as a youth hostel, now houses excellent gastronomy. The fantastic location offers a picturesque view over the river and the Rhine Falls.

The Rhine Falls in the best light

In the evening and during the Christmas season, both the waterfall and the buildings shine with lights and thus exude a very special flair. On July 31st, Switzerland's national holiday, there will be fireworks at the waterfall. Magnificent lighting and special light effects ensure an enchanting experience.

Unique view from the Adventure Park

The adventurous and climber from Adventure Park. With more than 165 climbing elements and 14 courses, it is the largest rope park in Switzerland in terms of area. High up in the trees you can not only enjoy the mountain air, but also the fascinating view.

For walkers and hikers, there are two paths on and around the Rhine Falls in Schaffhausen. The Kleiner Rundweg can be conquered in about an hour. It is about 3,4 kilometers long. At 7,2 kilometers, the Rheinfall circular route is significantly longer. It takes about two hours for this.

If you want to see the Rhine Falls in miniature, you can do so in the smilestones the possibility. The largest miniature system in Switzerland is located very close to the waterfall at the Neuhausen Rheinfall train station and shows other Swiss sights in addition to the Rhine Falls.

Data & facts about the Rhine Falls

The Rhine Falls are located west of Untersee, part of Lake Constance. With a width of 150 meters and a height of 23 meters, it is one of the largest and most water-rich waterfalls in Europe. It is even considered the largest waterfall in Europe. But he still has significant competition and comparisons are made again and again.

But the size is debatable. For example, the Vinnufossen in Norway is 860 meters high and the Langfossen 655 meters. With a height of 585 meters, the Seerenbach Falls are also gigantic. The Norwegian Laksforsen and the Dettifoss in Iceland score above all with the amount of water that falls into the depths.

The biggest competitor, however, is the Sarpsfossen. It is also in the far north. But none of these waterfalls is as wide as the Rhine Falls. This means that it can rightly still be called the largest waterfall in Europe. In addition, it is certainly the most idyllic and picturesque thanks to its location between the Castle of Laufen and the high cliffs and its turquoise blue, clear water.

Around 373 cubic meters of water cascade down the rocks of the Rhine Falls every second. They form a basin 13 meters deep in the impact zone. The waterfall near Schaffhausen is a natural obstacle for fish that cannot be overcome. However, one can occasionally witness a unique spectacle. Eels overcome the obstacle. However, not in the water, but on land, at the edge of the waterfall.

The Rhine Falls can look back on a long history. It was formed during the last ice age around 17.000 to 14.000 years ago. The original course of the Rhine ran from Schaffhausen in a westerly direction through the Klettgau. Its valley was filled with alpine gravel. During the Riss Ice Age about 120.000 years ago, the river was diverted to the south.

He thus formed the Rift period Rhine channel. Today, the basin drain corresponds to this channel. It has since been filled in with gravel again. The second change in the course of the Rhine occurred during the last ice age, the Würm ice age. The river was shifted to the south in a wide arc.

Today's riverbed was formed above the Rhine Falls on the hard Malmkalk. The waterfall was created right here at the transition from the hard Malm limestone to the easily removable gravel from the cracked ice age. That was about 15.000 years ago. The Rheinfallfelsen are the last remnants of the once steep limestone rocks to the left and right of the fall.

The hydropower of the Rhine Falls was used early on. Mills were built on the north side and a blast furnace was built in the 17th century. At the beginning of the 19th century, a power plant was built that supplied large local companies. To date, no large hydroelectric power station has been built directly at the Rhine Falls in order to preserve the landscape. In the mid-1990s, however, a power plant was built below the waterfall.

Discover the Rhine Falls by ship

If you want to experience the Rhine Falls in Schaffhausen up close, you should definitely get on one of the ships. It doesn't matter if you want to see the incredible roar up close or if you prefer a leisurely tour - everything is possible, there is something for everyone.

By far the most spectacular way to discover the Rhine Falls is to take the yellow line from Rhyfall-Maendli. In the course of the rock ride, adventure seekers have the incredible opportunity to climb the middle rock. From up there you have a very special view that will definitely not be forgotten. A photo or selfie from the middle rock of the Rhine Falls is an excellent memory.

The short tour is short but exciting the blue one Line. In the course of this trip, the Rhine Falls can be viewed from a completely different perspective. The camera or mobile phone should definitely be on board. The ideal trip for explorers is the one with the pink line.

Visitors learn exciting stories about the waterfall and the surrounding area. Thanks to the audio guide, foreign languages ​​are not an issue. The Red Line, on the other hand, takes you from castle to castle. It serves as a ferry connection between Laufen Castle and Wörth Castle.

Arrival by car, bus or train

The Rhine Falls near Schaffhausen can be easily reached by car, bicycle and public transport. There are large car parks in Neuhausen and at Laufen Castle. Coming from Germany, leave the N4 at Herblingen.

Now follow the blue signs towards Winterthur and after a few kilometers you will reach Schaffhausen. Here you follow the signs in the direction of the Rhine Falls. A Swiss vignette is not required for this route.

It is publicly possible to reach the Rhine Falls with the trolleybus line 1. It starts at Schaffhausen station. Drive in the direction of Herbstäcker to the Neuhausen Zentrum stop. Then continue on foot. Yellow markings show the way to the waterfall.

On the opposite side, near Laufen Castle, is the SBB station Schloss Laufen am Rheinfall. It is a station of the Rheinfallbahn Schaffhausen-Winterthur. In summer, visitors can also take the Rhyfall Express to the Rhine Falls. This tourist train connects the waterfall directly with the landing stage for the ships.

Vohrenbach
Vöhrenbach, a small town in the Schwarzwald-Baar district, lies about 800 meters above sea level in the Breg valley in the central Black Forest. Neighboring are Villingen-Schwenningen and

Optimally (magnetically) capture attractive experiences at home
With the Black Forest portal you come across a platform on the World Wide Web that lives up to its name. Because here you can really find everything
Basel

Basel Zoo
The people of Basel affectionately call 'their' zoological garden in the heart of the city Zolli. Here a fascinating park landscape merges with old trees and lovingly designed