Home » Cities & places in portrait » Gengenbach in the Ortenau region 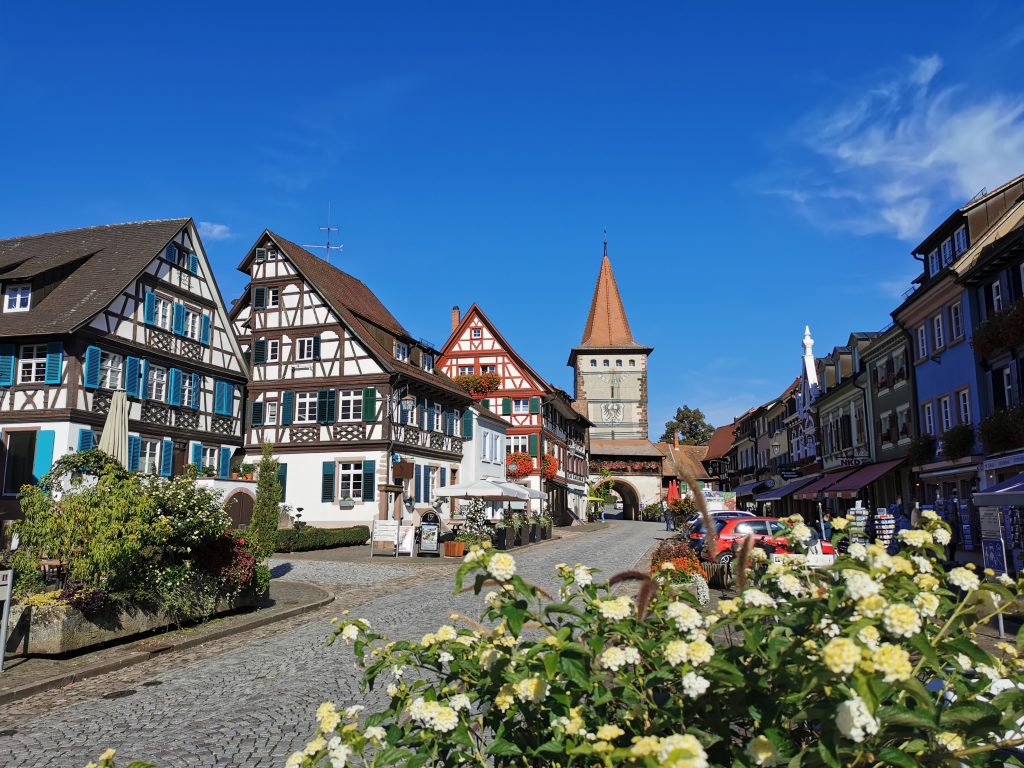 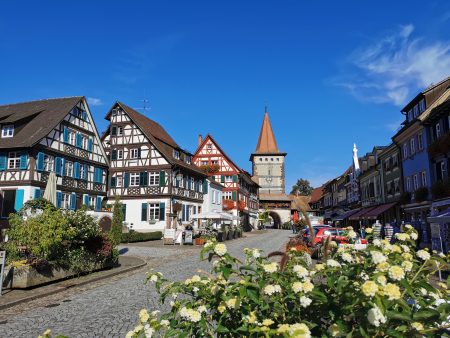 Gengenbach in the Ortenau region

The geographic location of Gengenbach.

Gengenbach is located in Kinzig on the edge of the Black Forest in the middle of the Kinzig valley. The city belongs to the district of Ortenau, the city center is about 175 m above sea level. The highest point in the city of Gengenbach is the Mooskopf with a height of 875 meters.

The history of the city.

Origin and development of the city

Near the so-called Benedictine monastery, Gengenbach emerged in the heyday of the Middle Ages from a rural settlement with an estate market. The city was first mentioned in a document around 1231.

Gengenbach as an imperial city.

Gengenbach became an imperial city in 1366. The area of ​​the imperial city includes the villages of Olsbach, Reichenbach, Bellmersbach and Schweinbach. This place has belonged to the Swabian Empire since 1500. Until 1803 the only buildings that have been preserved were the parish church, the Martinskirche, the Schwedenturm and the Obertor.
During the Thirty Years War, the city was destroyed in two sieges in 1634 and 1643. In March 1643 a cavalry unit of the Weimar Army serving in France was sighted near the city. 100 cavalry units from Offenburg (led by Lieutenant Colonel Basinger) chased the same cavalry unit into the Kinzig valley as far as Haslach. However, another division of the Weimar Army camped in Haslach. This led to the arrest of 100 men from Basinger. On March 2, 1643, a cavalry unit of around 1.000 men (under the command of Colonel Roßwurm) began to besiege Gengenbach. On March 3, the remainder of the army marched under the command of the Count of Gabrien, who bombarded the fortifications with artillery. The commandant of the fortress was forced to retreat by the general. This withdrew immediately because the general was taken hostage. During the Palatinate War of Succession, the city was almost completely destroyed by the French army in 1689. In the next century, the city was saved from the devastation of war and gained new prosperity. During this period, although 1789 houses were destroyed by fire in 50, most of the urban landscape is still in place today.

The mediatization of the city to this day.

In 1803 the city was incorporated into the Electorate of Baden. It was originally the seat of the Gengenbach Office and was reorganized into the Offenburg State Office in 1872. It has officially been part of the Ortenau district since 1973.

Every year during Advent, the Gengenbach town hall becomes the largest "Advent calendar house" in the world and is festively decorated. Another big event is the awarding of the Hermann Maas Medal, which is awarded every two years by the Evangelical Diocese of Gengenbach to individuals, groups and institutions that have campaigned for international understanding of universal importance. On the third weekend in September, the traditional wine and city festival can be found on the market square, which is the ideal event for every wine lover.

The registered association Gengenbach was founded in 1925. The Fools Guild is the largest association in town with around 1.205 members. The witch was introduced around 1935 and, at the same time as the Offenburg witch, is the oldest carnival witch ever. In 1938 Spättlehansel was added as the second masked figure of the witch. These two fools were temporarily represented by women or men, until 1957, when they were entered in the register of associations, the association's statutes were still in force. The witches were reserved for men and Spättlehansel were reserved for women. The Spättle and the Witch wandered around the city hotel, especially on Shrove Saturdays and Sundays, and used some noise to entertain Gengenbachers and guests. The traditional use of the mask is for the masked person to use a loud, disguised voice to read the riot to a fool without a mask and then steal something from a plate or glass. In 2014 Gengenbach counted 180 witches and 162 witches. The Fasend is therefore a firm tradition in Gengenbach and attracts many tourists every year.

Gengenbach is located on a half-timbered street in Germany. There are numerous museums in the city, such as the rafting and transport museum.

As a further attraction of the city, Gengenbach has received the historic tower outline, consisting of five towers and two church towers of the former city fortifications. In the municipal traffic office of the old department store near the market square, a memorial plaque has been commemorating the Jewish community of that time, which held services in Gengenbach until its extinction, since 1986. The most important sights include the old buildings from history, such as the Niggelturm, the Kinzigtor or the tower of the city church.

More on the topic:
Todtnau

Todtnau
Todtnau is located in the heart of the southern Black Forest at an altitude of 560m to 1490m between Feldberg and Belchen. The main town is at the end of the meadow valley
Villingen

Berlin's wellness hotel KroneLamm
WELLNESS-FITNESS-BEAUTY-RELAX-ENJOYMENT Experience daydreams with the Berlin family on the Zavelsteiner high plateau! We make your most precious time as valuable and enjoyable as possible