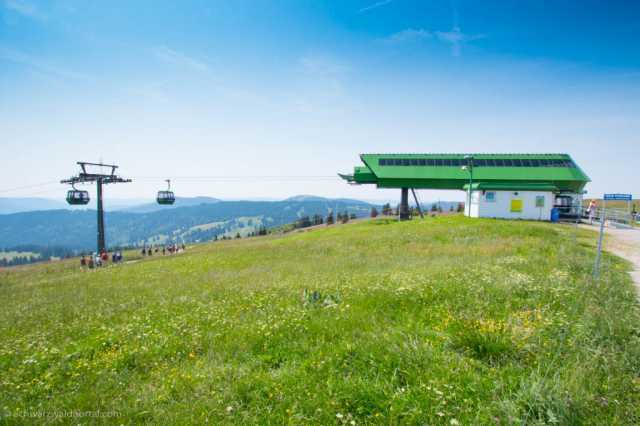 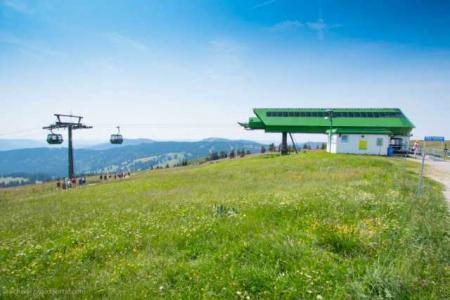 Feldberg in the Black Forest

Geographically, the Feldberg is southeast of Freiburg in Breisgau. Surrounded by the villages of Hinterzarten (north), Titisee (east), Menzenschwand and Bernau (south) and Todtnau (west).

The main peak extends south. The initially gently sloping Seebuck, which also belongs to the Feldberg, rises, from which the Baldenweger Buck branches off in the west. From the Seebuck, the Feldberg drops steeply to the east to the Feldsee. Deeply cut valleys extend to the northwest towards Freiburg (Zastlertal, St. Wilhelmer Tal) and to the southwest Basel (Wiesetal).

The Feldberg can be reached by car via the from Titisee to Lörrach (Basel) leading over the Feldbergpass B 317. By train you can reach the highest station of the German railway, the station Feldberg-Bärental. There is a bus connection from there.

The Vorberg, called Seebuck, can be reached from the village of Feldberg with a short chair lift. There is a climbable tower on the Seebuck. From there it's about 2 km almost flat to the Feldberg. Private people can only reach the summit on foot.

The cold war is history

The numerous radar systems used by the German, French and US armed forces during the Cold War have now been dismantled. The Feldberg is recognizable today with the old and new television tower and the Bismarck monument on the Seebuck (see above).

Ski area for the whole family

In total, there are almost a dozen ski lifts and slopes on and around the Feldberg. The actual Feldberg summit is outside the ski areas. He offers himself for Cross-country skiing as well as several cross-country trails around the Herzogenhorn opposite the Feldberg.

Most of the Feldberg area has the status of a nature reserve due to its subalpine vegetation. This protected area is the oldest and largest NSG in the state of Baden-Württemberg. Since 2001 it has been run by the Southern Black Forest Nature Conservation Center inHouse of nature”Supervised.

The Feldberg offers one of the most comprehensive panoramas in Germany, in winter, in inverse weather conditions. In the west, beyond the Upper Rhine Rift, you can see the entire Vosges from Ballon d'Alsace to the Donon and the Odilienberg. Behind it you can occasionally see the southern Palatinate Forest or “Vosges du Nord”. In the north is the Hornisgrinde, in the northeast the whole chain of the Swabian Alb, to the right of it the Hegau volcanoes.

The Alps extend in the south, from the Alpspitze and the Zugspitze in the east over the Allgäu Alps. The Lechquellen Mountains, Ferwall and Silvretta; then in the western Alps of the Alpstein (Säntis), the mountains around the Walensee. Ringelspitz, Glärnisch, Glarner Alps, Piz Gannaretsch, Vierwaldstätter Alps, Urner Alps, Bernese Alps, Grand Combin and Mont Blanc to the Freiburg Alps in the southwest. The Swiss Jura stretches in front of the Western Alps and especially to the right of Mont Blanc, with the Chasseral as the highest point.

Feldberg in the Black Forest

Tips for a short break in the Black Forest for single mothers
The mountains in Baden-Württemberg offer many wonderful excursion destinations and invite you to relax. And honestly, who deserves a break more than

Saving money on vacation in the Black Forest
For many, vacationing at home in a popular holiday region like the Black Forest is the perfect alternative to expensive flights and distant travel destinations. Still can

Hofsgrund / Schauinsland ski area
The ski area around Hofsgrund is easy to reach from Freiburg and has 5 tow lifts. The family-friendly routes are suitable for beginners as well as experts