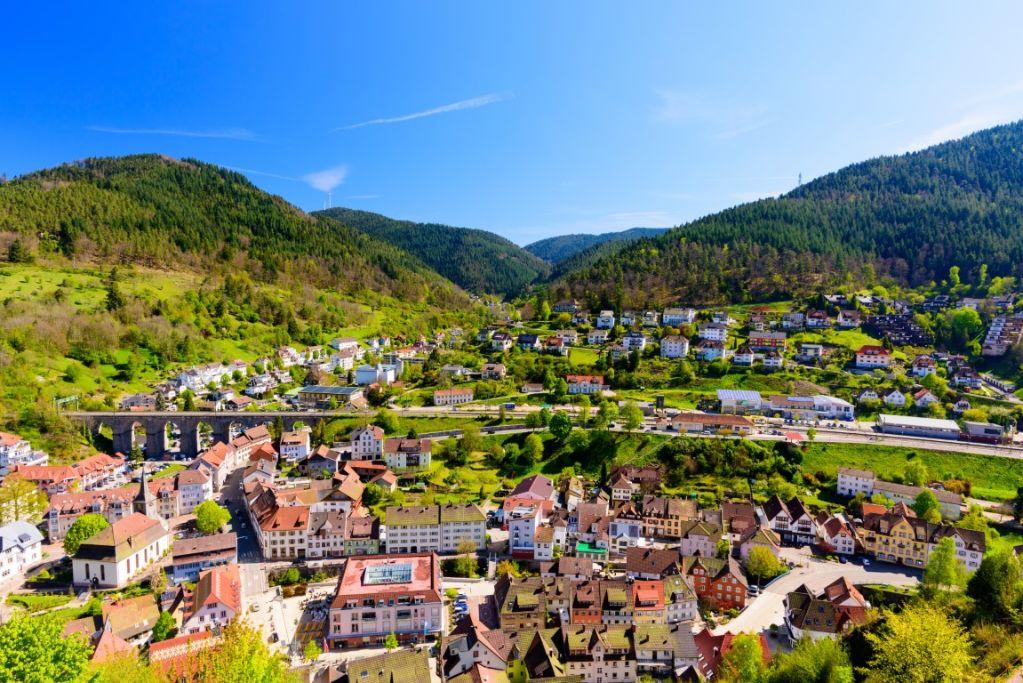 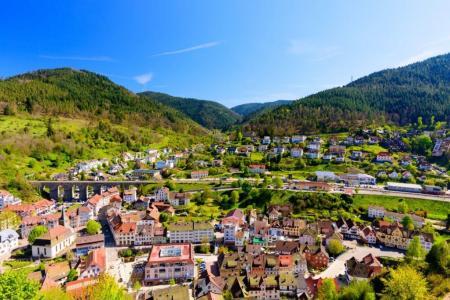 State-approved resort in the middle of the Black Forest!

... with the districts of Niederwasser and Reichenbach

It's rustic, in the middle of the Black Forest!

"If you already have the Black Forest, then please right into the middle." This is what the traditional natives of Hornberg said to themselves long ago and settled here! Of course, Hornberg wasn't called Hornberg back then, but it was always in the middle of the Black Forest ...!

And if you want to go to the Black Forest, then you should go right into the middle: To Hornberg. It is worth it!

The Hornberg landscape gets its special charm through contrasts: The town itself is located in the Gutach Valley (360 m above sea level), but the old Hornberg Castle towers defiantly above it on the rocky steep slope.

Idyllic meadow landscapes with magnificent fruit trees, under the shade of which cozy cows relax in summer, alternate with really black forest regions that stretch up to almost 1000 meters. Rugged granite rocks offer space for bright yellow flowering gorse fountains in many places and, of course, at the top for wonderful vantage points.

Impenetrable areas of fir trees begin right behind hilly wheat fields and ancient Black Forest houses with roofs that are almost down to the ground act as if they had invented cosiness. There are old fortifications that were directed against long-forgotten enemies ...

If you want to hike the constantly changing region from Hornberg, you will quickly notice that you need either a good level of fitness or a little time. But even for the less sporty, there are still enough flatter hiking trails on the ridge that can be easily and comfortably reached by bus or car.

For passionate hikers or bikers, Hornberg and “Um-Hornberg-Around” are a real Dorado. Behind every ledge, behind every hill, behind every bend in the stream lies something new!

And if you are a mushroom lover, Hornberg has something very special to offer you: Even well-known biologists and experts visit the unique Black Forest mushroom teaching show, the quality is so professional. You shouldn't miss it!

Undeterred by politics and borders, traditions such as wood carving have been and are still cultivated here today. But that in no way prevents the Hornbergers from building flourishing industrial companies in which the most modern technology is used. And modern hotels, pensions and restaurants are available to guests that are still cozy and homely.

Because you should feel comfortable here ...!

Everyone is talking about the Hornberg shooting. And hardly anyone knows the story. Here she is:

In 1564, probably on a Saturday, the Duke of Württemberg was announced as a high-ranking visit to Hornberg. The whole of Hornberg was on their feet to greet the “Fürscht”. Gunmen, ready for the thundering salute, waited in the courtyard eagerly for the signal that the tower guard was to give for the arrival of the authorities. The signal came, the guns thundered, only it wasn't the duke who came, but a herd of cattle. The signal was given again shortly afterwards, the salute bursts even louder, but this time again not for the duke but, shockingly, for a traveling merchant. When the Duke finally rushed in persona and his entourage, the signal came again, only the thunder of welcome did not come because the powder for the cannons had already been fired. In return, the Hornbergs shouted a resounding “Piff-Paff” in the princely ears of the Duke as he passed through the city gate, which, by the way, is said to have delighted the noble lords royally.

Since then, the Hornbergs have had a very clouded relationship with powder, cannons and salute shooting. But so that this story is never forgotten, it became an open-air summer game that you should definitely visit when you are in the Black Forest. This is how the Hornbergers discovered that they are excellent at acting. And that's why every year there is a different fairy tale as an open-air performance for the little ones and the young at heart!

Nevertheless, do not be angry if you as a guest are not greeted with a Hornberger salute but with an all the more cordial “Grüß Gott”!

More information is available from ...

Kirner oil mill
The historic oil mill in Grafenhausen still has fully functional mill technology from the 17th century. The fact that the drive technology is made entirely of wood
Wembach