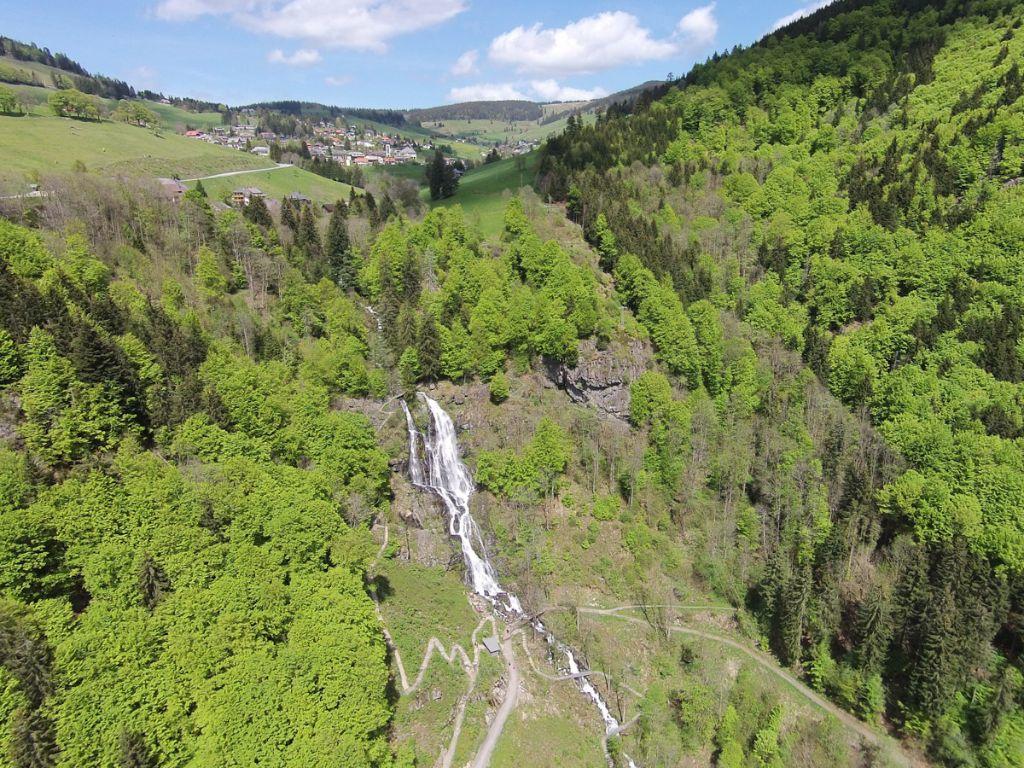 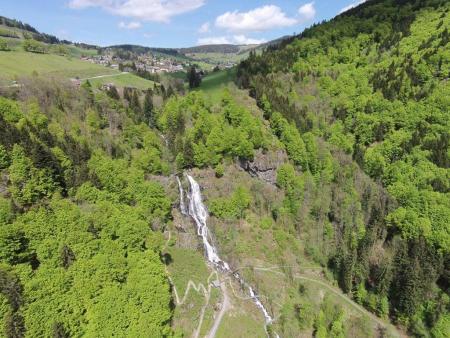 Waterfalls in the Black Forest

With a drop height of 163 meters, the Triberg waterfalls in Triberg in the Middle Black Forest as the highest waterfalls in Germany. The water of the Gutach falls over ten steps. The waterfalls are divided into two cascades: three of the steps belong to the upper cascade, seven belong to the lower one. However, the spectacle can only be admired via five different entrances for an entrance fee. A special highlight is the evening lighting in the summer months and the Triberg magic between Christmas and New Year. Then a million lights transform the area around the waterfall into a true winter fairy tale.

In the southern Black Forest, the water of the Stübenbach falls on five steps, almost a hundred meters, along a granite massif - the Todtnau waterfall. The fall from the penultimate step is 60 meters and is therefore the highest single step of a waterfall in German low mountain ranges. The waterfall has been a nature reserve since 1978 and a listed building since 1987. This puts it on the list of the ten most beautiful natural monuments in Germany. The waterfall can be admired all year round for a small admission fee, but access is not cleared in winter.

The highest waterfalls in the northern Black Forest - Allerheiligen waterfalls

The All Saints Waterfalls at Allerheiligen in the Northern Black Forest are the highest natural waterfalls in the Northern Black Forest. Over seven cascades they plunge 66 meters into the depth (other sources speak of almost 90 meters). The seven steps gave the waterfall the nickname Seven Bütten. In 1842 the grand ducal court chamber in Karlsruhe made 100 guilders available to increase the accessibility of the waterfalls so that they are still accessible on a circular hiking trail to this day. The so-called legend hiking trail also tells of the legends that entwine around the waterfalls and the nearby ruin of the monastery.

The Zweribach waterfalls in the middle of the Black Forest, in the middle of the nature reserve, can be reached via various hiking trails. There is a choice between a short hike of around two kilometers (from the hiking car park near Haldenhof) and a longer hike of five kilometers (from the Gasthaus Engel bus stop). Sometimes the path is steep and stony and not wider than a beaten path, so sturdy shoes and a little stamina are recommended. Then the waterfall in the Bannwald, where the Zweribach falls over two steps, a total of 40 meters in depth, offers a magnificent natural spectacle.

With a total height of 32 meters and a free fall height of 15 meters, the one belongs too Burgbach waterfall to the highest, free falling waterfalls in Germany. A tributary of the Burgbach falls here, by Bad Rippoldsau-Schapbach, located in the northern Black Forest, in the depths. Various hiking trails including the premium hiking trail 'Klösterle Loop' lead to the waterfall. The Burgbachfelsen with its observation pavilion is also worth a visit.

Almost 5 kilometers southwest of Baiersbronn, the water of the Sankenbach plunges into the Sankenbachsee. The water falls 40 meters along a Karwand. A special feature is a lock that can be opened manually: after a traffic jam, it is opened manually and the main fall of the waterfall is triggered. Then there are two more stages.

The legendary waterfalls with the sad name Edelfrauengrab waterfalls are located in the nature reserve Karlsruhe Grat-Gottschlägeal in the northern Black Forest. According to legend, an unfaithful noblewoman who gave the waterfall in the Black Forest its name to have found a violent end in a natural scouring cave. At the cave entrance, the Gottschlägbach meanders as a waterfall over 45 meters deep. To do this, the water passes through seven cascades with a total of 180 steps.

New perspective thanks to the bridge - Todtmoos waterfalls

There are also waterfalls that are worth seeing in the southern Black Forest. Between Dead moss and Hintertodtmoos, the Todtmoos waterfalls are waiting for a visit. The total drop height is 40 meters, which is divided into three steps, the highest of which is eight meters high. At the foot of the waterfall, a bridge invites you to cross the water.

In the city of Baden-BAden, which has a population of just over 50.000, you don't necessarily expect a waterfall. However, one can be found in the Geroldsau district. If you follow a one and a half kilometer long hiking trail through the forest, you will reach the Grobbach falls. With a fall height of only nine meters, over which the water falls into a wide basin, the waterfall is more of the small type, but is also classified as a two-dimensional natural monument. Famous personalities such as Johannes Brahms or Gustave Courbet also indulged in nature when they were in Baden-Baden.

Saving money on vacation in the Black Forest
For many, vacationing at home in a popular holiday region like the Black Forest is the perfect alternative to expensive flights and distant travel destinations. Still can

Tour around Todtmoos
Start: Todtmoos Kilometers: 29 With a steep ascent, the route initially leads on the L 151 via Todtmoos-Strick and Todtmoos-Weg to the Hochkopfhaus and on, again