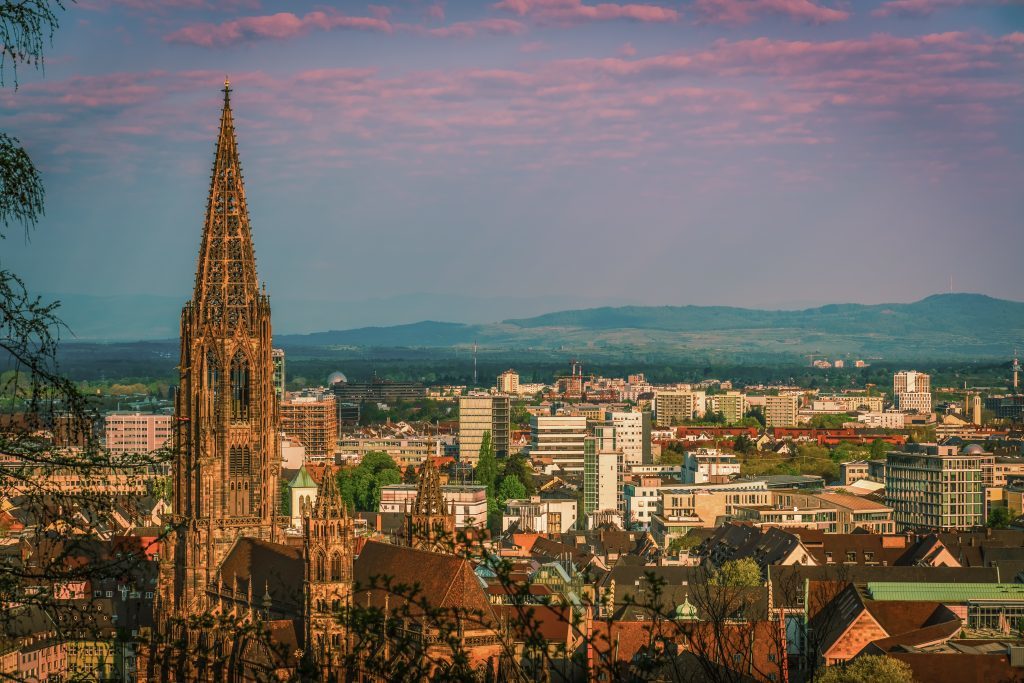 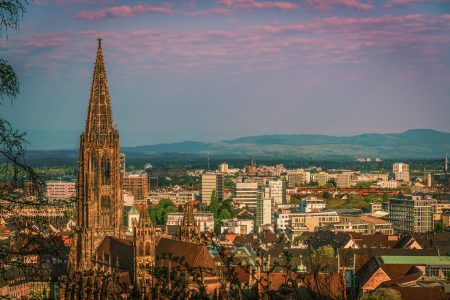 Impressive landscapes, history and sights - Freiburg im Breisgau is one of the most popular travel destinations in southern Germany. The city is also known as the "capital of the Black Forest" and is also the sunniest city in Germany, which makes a visit extremely attractive.

The city is located in Baden-Württemberg and is the southernmost in Germany. In addition, it is located in the border triangle, with close proximity to France and Switzerland, which again explains its great popularity. About 230.000 people live here, including 30.000 students. Every year around 3 million visitors flock to the Black Forest metropolis to experience the sights and nature. Freiburg im Breisgau is also one of the German university cities, due to the Albert-Ludwigs-University founded in 1457. This has a long tradition and is one of the oldest universities in Germany.

One of the most beautiful squares in Germany - the Münsterplatz

Münsterplatz is the city's largest square and is surrounded by numerous historical sights. Highlights are the Alte Wache, built in 1733, which has served as the House of Baden Wines since 1997. On the associated terrace you can enjoy a glass of Freiburg Pinot Gris undisturbed. Another figurehead of the square is the historic department store, which was built in 1520. Today it is a real eye-catcher due to the dark red color and the elaborate decoration. You shouldn't miss the 130 stalls that fill the square from Monday to Saturday and offer various regional goods - from food, plants and handicrafts, everything is there.

In this town parish and bishop's church you can experience the architectural style of several eras. Due to the long construction period, which lasted from 1200 to 1513, you can see elements of the Romanesque and Gothic or late Gothic style, among other things. Inside the Freiburg Minster you can marvel at altars, sculptures, stained glass and works of art from the Middle Ages. Another special feature is that the church remained largely intact despite the Second World War.

The Augustinian Museum building was originally a monastery of Augustinian hermits before being transformed into today's modern museum complex. Parts such as galleries, balconies, footbridges and windows make the building a special highlight. Due to the renowned collection, it is also one of the most important museums in the Upper Rhine. Here you can see art from the Middle Ages to Baroque to paintings from the 19th century. In addition to a permanent exhibition, you will find changing special exhibitions, so that variety is guaranteed. The library of the Augustinian Museum and the Museum of Contemporary Art are also open to the public. Over 70.000 titles guide you through art and cultural history.

The 15,9 km long Freiburg Bächle has been flowing through the entire old town since the Middle Ages, 6,4 km of it underground. During your walk through the alleys and streets of the old town you will definitely see the Freiburger Bächle. In the past, they performed important tasks, particularly in supplying extinguishing water and irrigating pastureland. The ban has been in force since the 14th century, stating that no solid materials may be disposed of here. This ensures a clean flow through the city.

The Martinstor - the oldest gate in the city

Originally there were four city gates in Freiburg im Breisgau. Only two of these are left - one of them is the Martinstor next to the Schwabentor. It is also the oldest and was built at the beginning of the 13th century to fortify the city. In recent years, this attraction has undergone several renovations, so it has existed in its current form since the beginning of the 20th century. When visiting the city, you can either walk through the gate or pass it by tram, which has passed through an arch of the Martinstor since 1901.

The highlights at a glance

Diverse events all year round

You should not only discover the numerous sights of the city, but also the events that take place throughout the year. Concerts, festivals, exhibitions and trade fairs - the choice is large. So find colorful in February carnival parades held, lively wine festivals in summer and the wonderful Christmas market in winter. The tent music festival has also been taking place since 1983, which is the venue for both concerts in the tent and open-air events. Throughout the year you can also take part in a city tour and let a local show you the most beautiful corners.

The history of the city

The founding of the city

The city was founded by the Zähringer dynasty in 1120. Due to the good location and the high silver deposits in the Black Forest, the city quickly gained wealth and influence. In 1200, Berthold V, the last Duke of the Zähringens, began building a large parish church, now known as the Minster. The citizens of the city assumed financial responsibility for the completion of the building in 1513. After the death of Berthold V, his nephew Egino, who came from the Counts of Urach family, succeeded him. From this point on, they called themselves the Counts of Freiburg and shaped their working life through wars and conflicts with the population. Because of this, the citizens bought their freedom from them in 1368 and from then on placed themselves under the rule of the Habsburgs.

Even before the start of the Second World War, the city's synagogue was destroyed in the night from November 9th to 10th. On November 27, 1944, an air raid destroyed large parts of Freiburg, with the cathedral remaining almost intact. In April 1945 there was an occupation by the French, who set up an administration and government for the state of Baden in 1946. In the years that followed, the main focus was on rebuilding the old town and removing the rubble. Freiburg im Breisgau was also the state capital of the state of Baden from 1945 to April 25, 1952.

A visit to Freiburg im Breisgau is appealing, varied and relaxing. Due to the numerous possibilities on site, you can experience culture and art, learn more about history and at the same time be active in sports and go on long hikes. This variety makes the Black Forest metropolis a very special travel destination.

Alpamare Pfaffikon
The Alpamare in Pfäffikon, Switzerland, is the largest indoor swimming pool in Europe. The Alpamare was opened on June 14, 1977. The swimming pool area is 25
Overview of Black Forest webcams
Webcams from the entire Black Forest. A webcam shows the current weather image of the corresponding location. There are now numerous webcams throughout the Black Forest. Navigation: All

Cottage Müllerbauernhof in the Black Forest