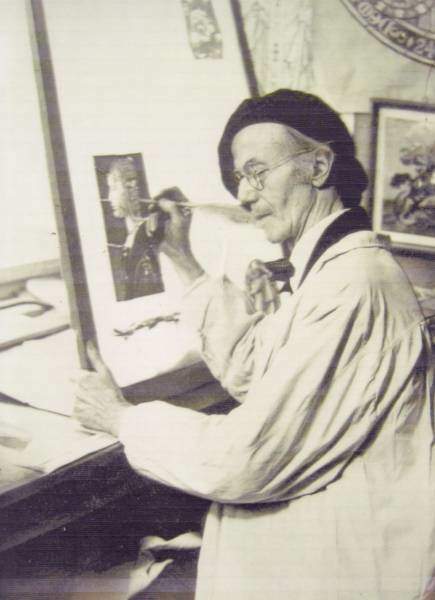 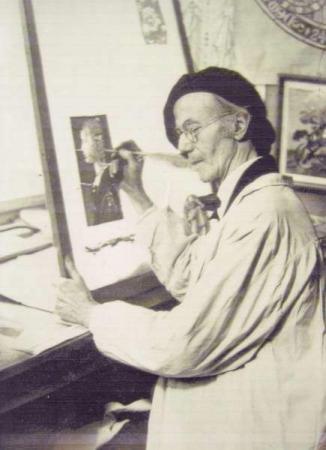 The association “Kultur im Schloss” wants to pay homage to the great artist and well-deserved son of the city, glass painter Georg Straub, with a large exhibition. After all, he and Josef Krausbeck laid the foundation for the Wolfacher Heimatmuseum. His works are to be exhibited from August 8th to October 3rd in the rooms of the Heimatmuseum, which is currently being renovated and rebuilt. In order to be able to implement the big project, the association needs the help of the population.

Wolfach (md). The basis of the large Straub exhibition, which the “Kultur im Schloss” association will hold in the rooms of the local history museum in August and September, is the legacy that the glass painter's family was able to acquire with the help of a sponsor. Many Wolfach families are in possession of original works of art by the glass painter (glass pictures, drawings, pictures, documents). The association is very interested in exhibiting these works by the glass painter as well. He assures the lenders to treat the works of art with the utmost care and to insure that they will be returned for the duration of the exhibition. Of course, the association is also happy when exhibits are “donated” to the museum as permanent loans. In addition to the exhibits, the association is also interested in background knowledge about the “Strauben-Schorsch”. Anyone who can contribute to the artist's life and work with stories is most welcome as an informant at the “Kultur im Schloss” association.

The association therefore appeals to the population: “Help us! Contact a member of “Kultur im Scshloss” or the first chairman Christian Oberfell, Sonnenmatte 17, 77709 Oberwolfach, tel. 0151 226 303 27 (mobile) or 07834/868396, e-mail coberfell@mac.com Information can also be obtained from the tourist information office in the town hall or from Waltraud Carosi (Moser bookstore in Wolfacher Vorstadt).

The glass painter Georg Straub was born on May 23, 1882 as the son of the painter and then Wolfacher Ochsenwirt Johann Georg Straub, a talented decorative painter who worked for a long time in Bavarian royal castles. After finishing school, the young ox landlord's son began his training as a glass painter in Karlsruhe, learned and worked in well-known glass painting workshops in Stuttgart, Dresden, Bielefeld, Lucerne, Offenburg, Frankfurt and finally in Baselwhere he created great works of art. His study trips took him through half of Europe, to France, Italy, Spain and Switzerland. But he always remained closely connected to his beloved hometown Wolfach.

After the First World War, Georg Straub settled in Wolfach. He lived and worked in the “Molerhüsle” in the Wolfacher Vorstadt. The house no longer exists, it was demolished in the course of the suburban renovation. Straub was a so-called history painter. He found his motifs for stained glass mainly in medieval representations. He was considered an excellent expert on heraldry, the legends of the saints and symbolism. In addition to glass painting, Straub also mastered drawing pencils, ink pens and wooden engravers to make sketches of the Black Forest homeland or portraits. His graphic works not only adorned newspaper reports, they can also be found in Franz Disch's chronicle. Strraub also earned his living as a commercial artist. He designed posters and commemorative publications for Wolfach clubs. For example, the designs for the medals of the Free Fools Guild in Wolfach come from him and he designed the certificate for Wolfach's honorary citizenship. But Straub has also made a name for himself as a poet.

Georg Straub did not get rich with his work. The artist lived with his wife Gertrud, née Schöck, whom he married in 1925, in modest circumstances in the Wolfach suburb. The marriage remained childless, and Straub showed an unusually high level of commitment to his hometown of Wolfach. With his friend Josef Krausbeck and artist colleague Eduard Trautwein, he laid the foundations for the local history museum in 1936 and after the Second World War he helped Krausbeck to rebuild the completely destroyed and devastated museum.

Georg Straub was also the director of the Wolfach Historical Society, a fool's father and a member of the city council. Straub died on December 3, 1959 at the age of 77 from heart failure. The day before, he had amused Wolfach's senior citizens with his contributions to the Altenkaffee.

Pizza a la Black Forest - a success story
Pizza is one of the most popular meals among Germans. So it is not surprising that the Black Forest region is no exception. There is even one here

Karlsruhe and the surrounding area - a holiday destination with variety
Germany has almost got used to preferring holidays in their own country. Due to the corona pandemic, the entry requirements are in many countries according to